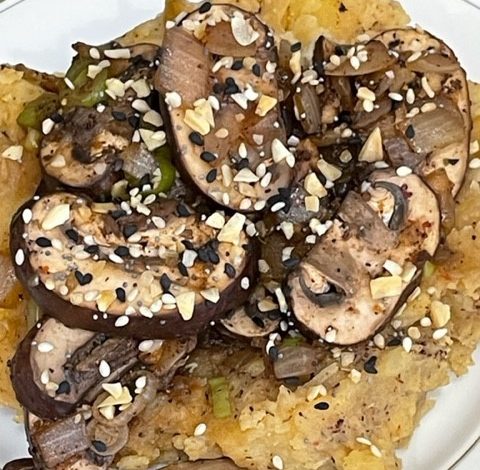 Roast Garlic – You might want to roast several heads of garlic at once. They will keep in the refrigerator for up to a week and have many uses. Preheat oven to 400 degrees.  Slice the pointed end off the head of garlic with a sharp knife so the ends of all cloves are exposed.  Wrap garlic head(s) in foil, and roast in oven for approximately 40 minutes until the heads compress easily when squeezed.  Remove from oven and allow to cool.

One head of roasted garlic

Combine water and Bada Bing in the bowl of your Instapot.  Add potatoes and set Instapot to steam for 8 minutes.  When finished, release steam manually.  Remove potatoes from liquid with tongs and place them in a large bowl.  Reserve liquid.  Squeeze roasted garlic cloves from the paper cortex into the potatoes.  Add Sel-acious and roughly mash the potatoes until the potatoes have been broken down but are still lumpy.  Slowly add some of the liquid to the potatoes while mashing until desired consistency is achieved. (I like it kind of lumpy with some chunks of potato still unmashed.)

1 bunch, green onions, sliced (white part plus about 1” of the green part)

In a very hot sauté pan or cast iron skillet, quickly sauté onions and garlic until onions are translucent and fragrant.  If necessary, deglaze pan with a little bit of water or broth made with water and Bada Bing Bouillon.  Add mushrooms and Sel-acious and continue to stir with a spatula until mushrooms are cooked through and tender.  Add Green onions and stir for just about 30 seconds more.  Remove from heat.

Scoop Mashed potatoes into a bowl, followed by sauteed mushrooms, plus your favorite topper (I used Local Spicery’s Showstopper Topper).

Select the fields to be shown. Others will be hidden. Drag and drop to rearrange the order.
Click outside to hide the comparison bar
Compare
Compare ×
Let's Compare! Continue shopping
×