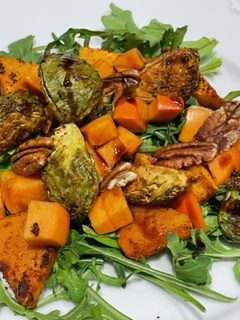 Preheat oven to 400 degrees.  Place a sheet of parchment covering a large baking sheet.  In large bowl, mix the Saigon Cinnamon with the Maple Syrup.  Toss the Butternut Squash triangles in the mixture until fully coated.  In another other bowl, combine the balsamic vinegar plus the Dijon mustard.  Toss the quartered Brussels sprouts in the mixture until fully coated.

Spread the butternut squash and Brussels sprouts out on the parchment-covered baking sheet separately, sprinkle with Local Spicery Sel-acious Salt Substitute.  Roast at 400 degrees for 20 minutes, turning them with a spatula at the halfway point.

Preheat toaster oven or air fryer to 350 degrees.  Spread pecan halves out on a tray, and toast for just a few minutes in the toaster oven until the pecans start to darken and have a toasted flavor.

Assemble all the ingredients and serve over a bed of lettuce or other greens.  Drizzle lightly with balsamic vinegar. Serve hot or room temperature.

Share this post
Gifts of the Spicerer – Three simple sauces from kingdoms to the east for your holiday table. (SOS free)
Vegan Peruvian Papa a la Huancaina (Potatoes in Yellow Sauce)